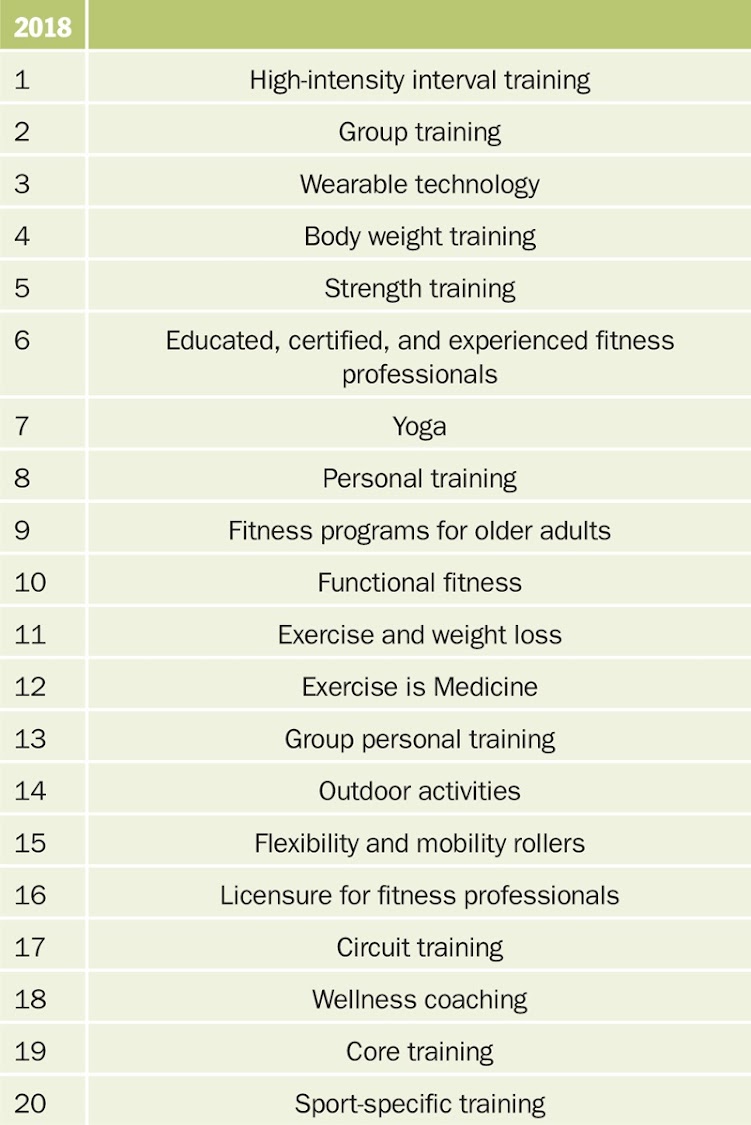 The survey‚ now in its 12th year‚ by ACSM’s Health & Fitness Journal‚ spans the globe and includes respondents from South Africa. Its editors note that some emerging trends from the last three years have been confirmed and two new trends are in the top 10.

The top choice is high-intensity interval training‚ which has been consistently favoured‚ the survey shows.

The 2018 survey continues to support 17 of the previous top 20 trends from 2017 with three additional trends appearing in the top 20: licensure for fitness professionals (number 16)‚ core training (number 19)‚ and sport-specific training (number 20).

Yoga is a steady “people pleaser”.

NEED TO KNOW ABOUT THE TOP 5 TRENDS

1. High-intensity interval training. HIIT typically involves short bursts of high-intensity exercise followed by a short period of rest or recovery and typically takes less than 30 minutes to perform. Some survey respondents are concerned about a potentially high injury rate.

2. Group training. Group exercise instructors teach‚ lead‚ and motivate individuals through intentionally designed larger group exercise classes (more than five). Group programs are designed to be effective sessions for different fitness levels and are motivational with instructors having leadership techniques that help individuals in their classes achieve fitness goals. There are many types of classes and equipment‚ from aerobics and bicycles to dance classes. The authors notes that none of the respondents could explain why group training has become popular‚ “so it will be interesting to watch this trend in 2018 and beyond. Note that this is a general trend for larger exercise classes and not specialty classes such as Zumba and other dance classes”.

4. Body weight training. The survey editors note: “Body weight training has been used previously‚ in fact people have been using their own body weight for centuries as a form of resistance training. But new packaging‚ particularly by commercial clubs‚ has now made it popular in all kinds of gyms and health clubs around the world. Typical body weight training programs use minimal equipment‚ which makes it a very inexpensive way to exercise effectively.”

5. Strength training. This dropped to number 4 in the 2015 and 2016 surveys and number 5 in 2017 after being at the number 2 position for two years but has been a strong trend since the first year of this survey‚ the authors said. “Many younger clients of both community-based programs and commercial clubs train almost exclusively using weights. In today’s gyms‚ however‚ there are many others (men and women‚ young and old‚ children‚ and patients with a stable chronic disease) whose main focus is on using weight training to improve or maintain strength.”